Yep, it’s back once again to the wonderful world of arengae and indeed back again to the specific arenga we’ve already covered on this blog. One thing which happened at the recent International Medieval Congress was that it occurred to me that this arenga, in its ninth-century form, is a nice little illustration of something I bang on about a fair bit, which is the portability of Carolingian ideology. So let’s revisit the spread of this prologue to illustrate that.

In 862, King Charles the Bald’s long-standing ally Abbot Louis of Saint-Denis was looking to make a very substantial settlement of his abbey’s administration, fixing the revenues available to the monks versus those available to the abbot. To mark the occasion, someone in the royal chancery – over which Louis presided as archchancellor – came up with a new prologue to the royal diploma formalising the split, as follows:

If We confirm by Our edicts that which Our predecessors, by the ordination of divine providence endowed with regal sublimity and illuminated with celestial honour and stirred up by the devoted admonition and prayers of those faithful to the holy Church of God and to them, decreed be established for the state and convenience of churches and servants of God, and if We consent to their most devoted dispositions and carry out the same most pious gifts to the Lord, We believe that this will far from doubt benefit Us in eternal blessing and the tutelage of the entire realm committed to Us by God, and We are confident that the Lord will repay Us in future…

It’s pretty fancy, fancy enough to be recognisable, but the sentiment is conventional. It served its purpose for a more-literary-than-usual introduction to a particularly solemn act, and there it rested for five years. At that time, in 867, with Louis dead, his successor as archchancellor, who also happened to be his half-brother, Gozlin, was doing something very similar at the abbey of Saint-Vaast, in Arras. Evidently he, or a member of his entourage, decided this was an appropriately formal occasion to dust off the old prologue, and so it shows up again here.* Five years after that, Gozlin did the same for another one of his abbeys, Saint-Germain-des-Prés. The final diploma with this prologue, that to the cathedral of Rouen we mentioned before, was also issued around this time.

Not a huge number, but a revealing case. What we have here is an example of a prologue invented for one particular circumstance at Saint-Denis being re-used for no fewer than three other institutions, one also Parisian but the other two in what would become Normandy and southern Flanders. We can see (except perhaps in the Rouen case) fairly clearly how they spread, but what’s more striking is that they could. Charles the Bald and his court could issue diplomas for recipients in such diverse areas in the same language with no problems.

A century or more later, this would not be the case. Normandy, Flanders, and Paris spoke about how and why their rulers were legitimate in very different ways – you couldn’t easily port something as regionally-specific as Norman identity to the heartland of Capetian rule at Saint-Denis. In the ninth century, by contrast, there is a much more coherent idea of legitimate rule at play, which speaks to people in all these different places, and means that a king and his followers can talk to Saint-Vaast like it’s Rouen and Rouen like it’s Paris.

*Actually many of these have minor variations, but they’re all recognisably from the same stem.

More adventures in tourism! This time, I decided to go to Namur, partially because it had been recommended as a lovely city by family, and partly in the name of actually meeting the person who had invited me to give the paper at the conference on advocacy I mentioned when I ended up writing what would have been most of a fairly interesting paper, had I but known at the time. So I sent him an e-mail, and he very kindly agreed to spend several hours of his weekend showing me around Namur. So I’d like to thank Nicolas for that (and if you want to know more, you can follow his Twitter account at @nruffinironzani)!

Namur is in the valley of the Meuse, where it joins the Sambre, and it’s got, really, two parts to it. First is the town proper, down in the river valley; but overlooking the town is a rocky escarpment. This was an obvious place to build a castle, and indeed many regimes have done so over the years, starting with the tenth-century counts (because tenth century is best), and going all the way up to modern times. The current fortress is early modern – it wasn’t actually built by Vauban, but the tourist information boards did play up the connection.

Its setting is extremely impressive, and the views are lovely, but to get the most of it, you probably have to be more of a fan of eighteenth-century military architecture than I am. 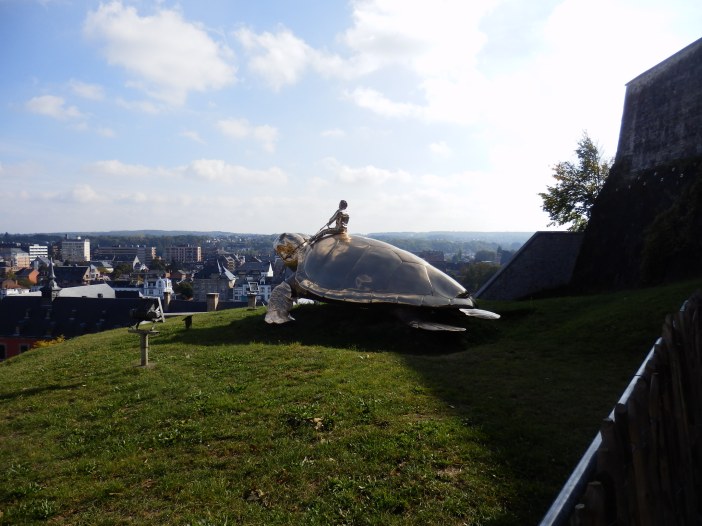 Or of giant gold tortoises, which I admit may be more likely to generate consensus.

The cathedral is relatively new; certainly in the period with which I’m familiar(-ish) with Namur’s history, there wasn’t a bishop here. The building itself is Baroque, but we didn’t go in, because instead Nicolas recommended what turned out to be the highlight of the trip: 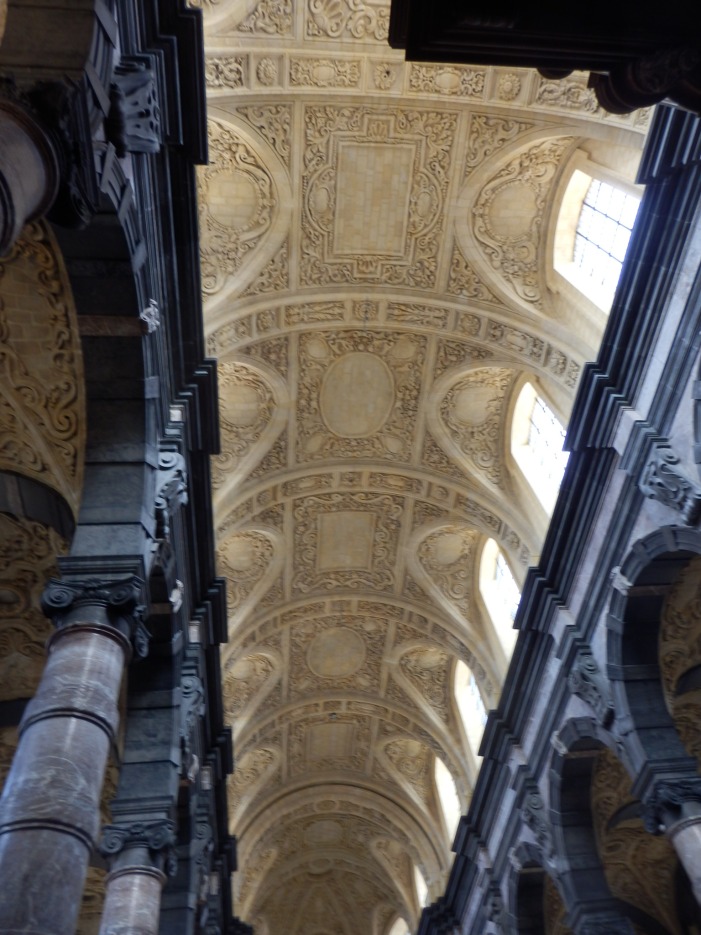 The Jesuit church of Saint-Loup.

I’m not usually one for Baroque, but this church was seriously gorgeous.

Only a quick post this week, because coming up is some more hard-core history. Having been swotting up on Aquitaine and Burgundy, it’s time to finally get some thoughts down about the tria regna of post-Carolingian France in comparative perspective…