It’s been almost a decade since we last checked in on Provence. In the middle of the 910s, it was already pretty weird – despite its ruler’s political failure in Italy and subsequent blinding, and, even more importantly, despite the fact that Louis the Blind did not (as far as we can tell) leave Vienne for the last twenty years of his life, it seems to have been a stable polity with Louis’ rule still proving effective. And then, in the mid-920s, it collapsed.

Quite why is a question up for debate. Our internal evidence from Provence consists, more or less, of a handful of royal diplomas – including this one:

In the name of God Eternal on high.

Louis, by grace of His favour emperor augustus.

We decree it be known to the industry of all the followers of the holy Church of God and Us, present and future, that Our famous son Count Charles [Constantine of Vienne] approached Our presence, entreating that We might command a precept be made for a man named Bonus, faithful and of one mind with Us and the most intimate obediencer of Our sacred palace, concerning a certain curtilage in Tressin which he bought off Levi the Jew, with fields and woods, and a vineyard held above it, which he exchange with the good Bonus from his inheritance in that estate.

Lending Our ears to his petition, We decreed this letters of Our Eminence be made, through which let the said Bonus and his wife Gertrude be able to obtain, rule and possess firmly and securely all the aforesaid goods in the estate of Tressin acquired by himself as property.

And that this authority of Our largess might obtain undisturbed firmness, We confirmed it below with Our own hand and We commanded it be signed with the impression of Our signet.

Ubald the notary wrote this. 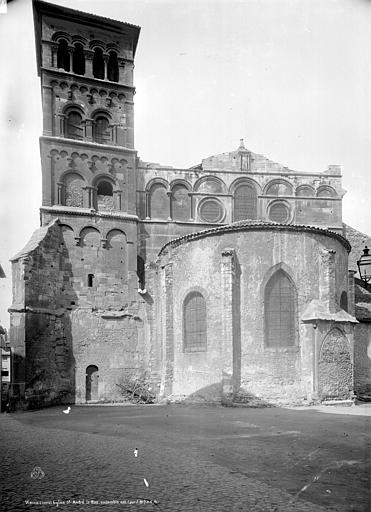 The abbey of Saint-André-le-Bas in Vienne, where Louis seems to have spent much of his time (source).

The two figures in this charter are the only men (other than the archbishop of Vienne) to appear in Louis’ diplomas from these years: Bonus the obsecundator (which I have translated as ‘obediencer’, but more on which below), and Louis’ son Charles Constantine. Charles’ role is slightly less murky: in the mid-920s he emerges as count of Vienne (itself not a common royal for king’s sons). Bonus, though, is a different question. It is possible that he was basically insignificant – all we know of him comes from three royal diplomas which ended up in the archives of Cluny, so his omnipresence at court may be an illusion caused by source preservation. However, his title of obsecundator is a strange one – as far as I know, it’s the only instance of this – and how it should be translated depends heavily on what you think his political role is.

There’s a chicken-and-egg question here: are Charles (and Bonus) big deals because everyone else abandoned Louis; or did Louis’ promotion of Charles (and Bonus) drive others away? If obsecundator could be translated as something like ‘disability support assistant’, the closeness to the king which the role would have given might produce the latter scenario, but there’s no other evidence for it. Frankly, either case is plausible.

Are there any other hints? Two things spring to mind. First, the deposition of Charles the Simple. West Frankish power up to the early 920s had been significant, and if Louis was in any way connected to it, this might have promoted his regime’s stability. Even more, Charles’ deposition made way for Ralph of Burgundy, a king who already had significant interests in southern Burgundy and northern Provence, and who in 924 met and spoke with Hugh of Arles, although to what effect we don’t know. Hugh of Arles is himself the second factor – in 926 he became king of Italy, and it might be that his departure hollowed out Louis’ regime. I’ve always had trouble with this idea, though, because Hugh had been looking towards Italy with interest for years; and also because Hugh’s bid to become king didn’t seriously take off until after Louis’ power seems to have collapsed. If I were going to attribute Louis’ mid-to-late 920s problems to any one factor, then, it would be the predatory interest of his cousin Ralph of Burgundy looming on the horizon; but really, I don’t know. Research remains ongoing!

2 thoughts on “Charter a Week 49 – Twilight in Vienne”